Governor Dayton recently stated that he believed that people on the FBI's Terrorist Watch List should not own firearms and should be stopped from doing so in Minnesota. 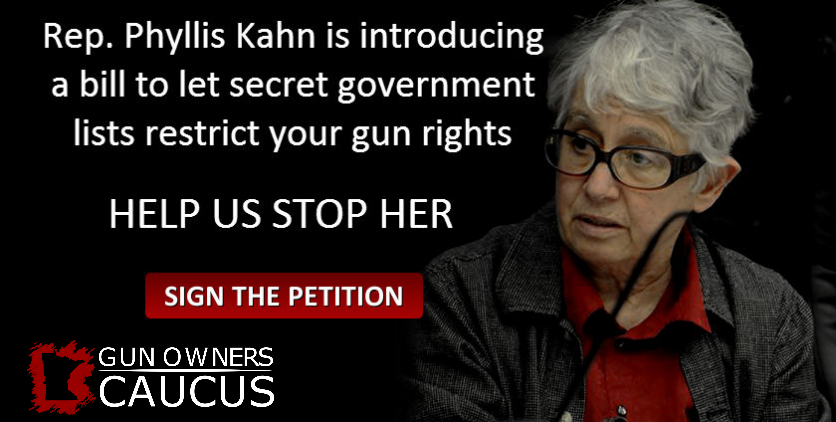 In addition, on January 26th, Rep. Phyllis Kahn stated that she would introduce legislation to ban people on the secret FBI Terrorist Watch List from purchasing firearms.

On the surface, this seems an admirable goal.. until you realize that there's over a million people on the watch list, and that the list is full of errors, omissions, and mistakes. Even the American Civil Liberties Union believes that the list is out of control.

The complete lack of due process illustrates why this list cannot be used as a screening factor to prohibit law-abiding Minnesotans from exercising their constitutional right to keep and bear arms.

Actions that you can take right now to help us call upon Governor Dayton & Rep. Kahn to follow due process and stop calling for the use of secret government lists to stop gun owners from exercising their constitutional rights:

In a statement on December 18th, 2015, Governor Dayton stated that he supported using the FBI's Terrorist Watch List to prohibit persons from purchasing a firearm in Minnesota.

During an appearance on KTLK's "Up and at 'Em" show on January 26th, 2016, Rep. Kahn stated that she would introduce legislation to prohibit persons on the FBI Terrorist Watch List from purchasing a firearm in Minnesota.

Secret government lists that are rife with errors and mistakes should not be used to keep law-abiding Minnesotans from exercising their constitutional right to keep and bear arms.

We demand that you end your support for the use of secret government lists, and instead stand with our founding fathers on the principles of due process under the law.

Join Us! Donate Find an Event