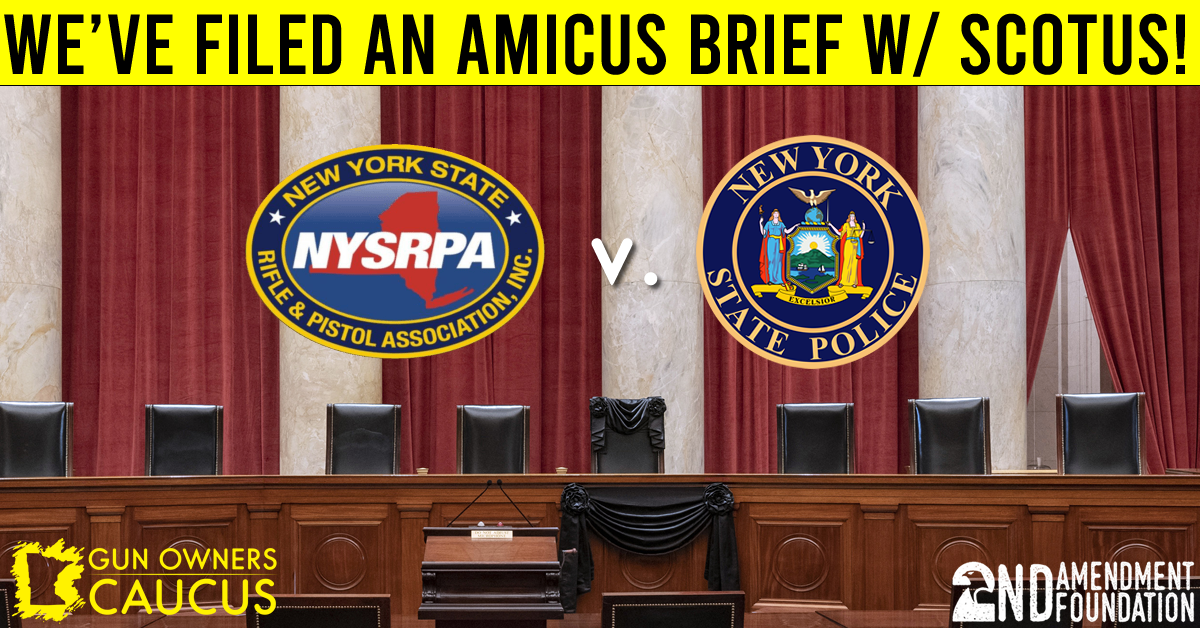 In this case, the New York State Rifle & Pistol Association is suing the State of New York over their may-issue permitting law for the lawful carry of firearms.

Our involvement in this case is as a 'friend of the court'.  We are not a direct plaintiff in this case.

In cases before the United States Supreme Court, the court certifies questions presented to the court on which arguments must be centered. In this case, the court has accepted the following question to resolve:

New York prohibits its ordinary law-abiding citizens from carrying a handgun outside the home without a license, and it denies licenses to every citizen who fails to convince the state that he or she has “proper cause” to carry a firearm. In District of Columbia v. Heller, this Court held that the Second Amendment protects “the individual right to possess and carry weapons in case of confrontation,” 554 U.S. 570, 592 (2008), and in McDonald v. City of Chicago, the Court held that this right “is fully applicable to the States,” 561 U.S. 742, 750 (2010). For more than a decade since then, numerous courts of appeals have squarely divided on this critical question: whether the Second Amendment allows the government to deprive ordinary law-abiding citizens of the right to possess and carry a handgun outside the home. This circuit split is open and acknowledged, and it is squarely presented by this petition, in which the Second Circuit affirmed the constitutionality of a New York regime that prohibits law-abiding individuals from carrying a handgun unless they first demonstrate some form of “proper cause” that distinguishes them from the body of “the people” protected by the Second Amendment. The time has come for this Court to resolve this critical constitutional impasse and reaffirm the citizens’ fundamental right to carry a handgun for self-defense.

The question presented is: Whether the Second Amendment allows the government to prohibit ordinary law-abiding citizens from carrying handguns outside the home for self-defense.

GRANTED LIMITED TO THE FOLLOWING QUESTION:

WHETHER THE STATE'S DENIAL OF PETITIONERS' APPLICATIONS FOR CONCEALED-CARRY LICENSES FOR SELF-DEFENSE VIOLATED THE SECOND AMENDMENT.

The Minnesota Gun Owners Caucus is represented in this case by David H. Thompson and Peter A. Patterson of Cooper & Kirk, PLLC in Washington, DC.

The United States Supreme Court will hear oral argument in this case for November 3rd, 2021.  Audio of the argument will be available through the US Supreme Court website.

Updates can be found on the Court's website through the docket link above.

You can make a tax-deductible donation directly to our Support Fund at this link.

You can also support our Support Fund through your purchases on Amazon through the Amazon Smile program. It takes just a few minutes to set up through our easy step-by-step guide.